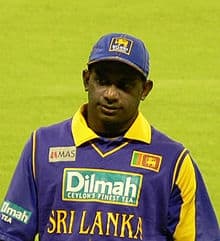 Deshabandu Sanath Teran Jayasuriya (Tamil: சனத் ஜெயசூர்யா; born 30 June 1969), popularly known as Master Blaster is a former Sri Lankan cricketer and a captain. Jayasuriya is credited for having revolutionized one-day international cricket with his explosive batting with Romesh Kaluwitharana in the mid 1990s, which initiated the hard-hitting modern-day batting strategy of all nations. Considered one of the greatest attacking batsmen of all time, Jayasuriya is well known for his powerful striking and match-winning all-round performances in all formats of the game. Jayasuriya was an all-rounder, who had an international cricket career that spread over two decades. He is the only player to score over 10,000 runs and capture more than 300 wickets in One Day International cricket. Regarded as one of the best all-rounders in the history of limited-overs cricket, Jayasuriya created many records during his career.He was named the Most Valuable Player of 1996 Cricket World Cup and Wisden Cricketers’ Almanack broke an age-old tradition by naming him one of Five Cricketers’ of the Year 1997 despite not playing the previous season in England. Jayasuriya was also the captain of the Sri Lankan cricket team from 1999 to 2003.
He was also a key member of the team that won the 1996 Cricket World Cup and was part of the team that made the finals of 2007 Cricket World Cup and 2009 ICC World Twenty20. He retired from Test cricket in December 2007 and from limited-overs cricket in June 2011. On 28 January 2013, Sri Lanka Cricket appointed him as the chairman of the cricket selection committee. Sri Lanka won the ICC World Twenty20 for the first time in 2014, during his tenure as the chief selector.
Jayasuriya ran for public office at the 2010 Sri Lankan general elections and was elected to the parliament from his native Matara District. He topped the UPFA parliamentary election list for Matara district by obtaining 74,352 preferential votes.
He served as the deputy minister of Postal services in the former UPFA government led by Mahinda Rajapaksa, and later as the Deputy Minister of Local Government & Rural Development under president Maithripala Sirisena. Jayasuriya did not contest for the 2015 Sri Lankan general election, though he won most votes from Matara district under UPFA in the 2010 Sri Lankan general election. He is currently not active in politics.