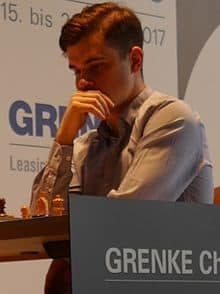 Maxim Sergeevich Matlakov (Russian: Максим Сергеевич Матлаков; born 5 March 1991) is a Russian chess grandmaster. He won the European Individual Chess Championship in 2017.
He acted as a second for Peter Svidler in the Candidates Tournaments of 2013, 2014 and 2016.