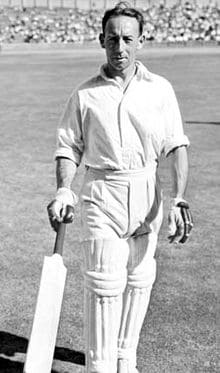 Arthur Lindsay Hassett (28 August 1913 – 16 June 1993) was a cricketer who played for Victoria and Australia. The diminutive Hassett was an elegant middle-order batsman, described by Wisden as, “… a master of nearly every stroke … his superb timing, nimble footwork and strong wrists enabled him to make batting look a simple matter”. His sporting career at school singled him out as a precocious talent, but he took a number of seasons to secure a regular place in first-class cricket and initially struggled to make large scores. Selected for the 1938 tour of England with only one first-class century to his name, Hassett established himself with three consecutive first-class tons at the start of the campaign. Although he struggled in the Tests, he played a crucial role in Australia’s win in the Fourth Test, with a composed display in the run-chase which sealed the retention of the Ashes. Upon returning to Australia, he distinguished himself in domestic cricket with a series of high scores, becoming the only player to score two centuries in a match against Bill O’Reilly—widely regarded as the best bowler in the world.
However, the eruption of World War II interrupted Hassett’s progress. With first-class cricket cancelled, he enlisted in the Second Australian Imperial Force, serving in the Middle East and New Guinea before being chosen to captain the Australian Services cricket team that played the “Victory Tests” in England during the months immediately following Victory in Europe Day. Hassett was the only capped Test player in the team and his men unexpectedly drew the series 2–2 against an English team consisting of Test cricketers. Hassett’s leadership was intrinsic to the success of the team, which toured and helped to re-establish the game in England, India and Australia in the aftermath of the war.
At the advanced age of 32, Hassett began his Test cricket career in earnest and became a more sedate, cautious player who often frustrated spectators with his slow scoring. From 1946–47 onwards, he served as Don Bradman’s vice-captain for three series, including the Invincibles tour of England in 1948. He then succeeded the retired Bradman as Australian captain in 1949 and presided over a successful team that gradually aged and declined. After an unbeaten tour of South Africa that saw a 4–0 triumph in the Tests, Hassett led the Australians to 4–1 home win over England in the 1950–51 Ashes series. The solitary loss in the Fifth Test was the first Australian Test defeat since the resumption of cricket after World War II. Australia’s dominance of world cricket waned and, in Hassett’s final season at home in 1952–53, it drew 2–2 against a South African team that was expected to be weak opposition. In 24 Test matches as captain, Hassett oversaw 14 wins and suffered defeat only four times, but it was the last of the four losses that blighted his record.
Defeated in the last match of the 1953 series against England, Hassett’s team lost The Ashes, ending Australia’s 19-year ascendancy. At the age of 40, he promptly retired following a final testimonial match after returning to Australia. A cheerful character with a poker face that aided his captaincy, Hassett was known for his ability as an ambassador for Australia, his sense of humour and diplomatic skills. Richie Benaud wrote of him: “There are others who have made more runs and taken more wickets, but very few have ever got more out of a lifetime.” In 2003, he was inducted into the Australian Cricket Hall of Fame by Cricket Australia.