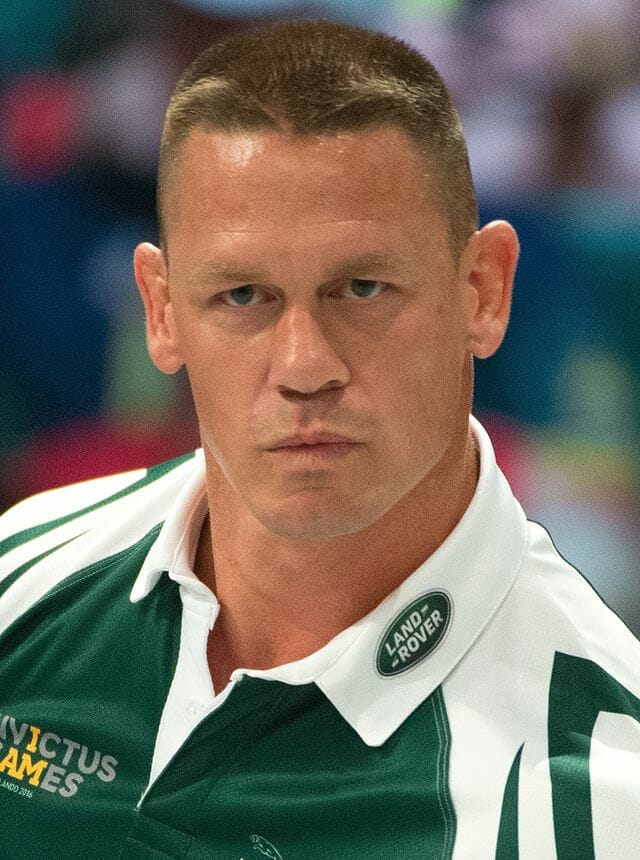 John Felix Anthony Cena Jr. ( born April 23, 1977) is an American professional wrestler, actor, and television presenter. Widely regarded as one of the greatest professional wrestlers of all time, he is currently signed to the WWE on a part-time deal, is the current host of Are You Smarter Than a Fifth Grader? on Nickelodeon and has starred in various films.
Born and raised in West Newbury, Massachusetts, Cena moved to California in 1998 to pursue a career as a bodybuilder. He transitioned to professional wrestling in 1999 when he debuted for Ultimate Pro Wrestling (UPW). He signed with the World Wrestling Federation (WWF, now WWE) in 2001, where he was initially assigned to Ohio Valley Wrestling (OVW). He gained fame in the WWE after adopting the persona of a trash-talking rapper. He won his first singles title, the United States Championship, in 2004. The next year, he won the WWE Championship for the first time, and his character subsequently transitioned into a clean-cut “Superman-like” hero. He then led the company as its franchise player and its public face for the next decade.Cena is a five-time United States Champion, four-time world tag team champion, and a 16-time world champion. He is tied with Ric Flair for the most world championship reigns in WWE history. Of his 16 world championship reigns, 13 of them are with the WWE Championship, which is the current record for that specific title. He is also a two-time Royal Rumble match winner and a one-time Money in the Bank winner, and has headlined several major WWE pay-per-view events, including their flagship event, WrestleMania, five times.
Despite being considered one of the greatest professional wrestlers of all time, Cena has nevertheless met with varied critical and fan reception during his career. He has been praised for his character work and promotion skills but criticized for his supposed over-representation and victories over rising stars, which are deemed “burials”. He is thus regarded as one of the most polarizing professional wrestlers of all time.Cena has starred in films such as The Marine (2006), 12 Rounds (2009), Trainwreck (2015), Ferdinand (2017), Bumblebee (2018), and F9 (2021). He also released a rap album called You Can’t See Me (2005), which went platinum. Outside his work in entertainment, he is known for his involvement in numerous charitable causes such as the Make-A-Wish Foundation, where he has granted the most wishes in history at over 600.