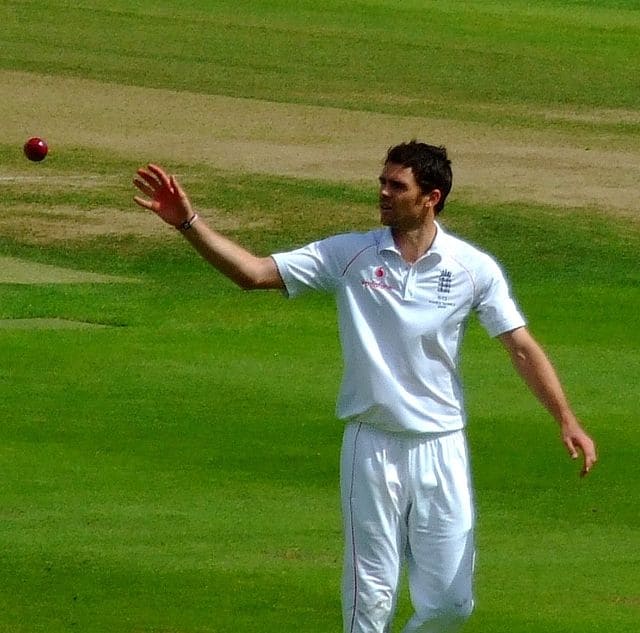 James Michael Anderson (born 30 July 1982) is an English international cricketer who plays for Lancashire County Cricket Club and the England cricket team. He is also a part time cricket commentator at BBC. Among fast bowlers, Anderson is the leading wicket-taker of all-time at Test cricket level, as the only fast bowler to have taken 600 or more Test wickets, and is the third-highest wicket-taker overall. He also holds the record for the most wickets taken by an England player in One-Day International (ODI) cricket. In June 2021 he made his 162nd appearance for England in Test cricket, becoming England’s most capped player. He is regarded as one of the greatest bowlers in the history of cricket.A right-arm fast swing bowler, Anderson made his international debut at the end of 2002 during England’s winter tour of Australia, then played his first Test match against Zimbabwe when the team toured England the following summer. Subsequently, he has played for his country in more than 160 Test matches, becoming the most capped player for England in Test cricket. He has also played nearly 200 One Day Internationals. His early career was held back by injuries, including a stress fracture of the back which kept him out of action for most of the 2006 season, but thereafter he established himself as the key opening bowler in the England Test team. He was a regular strike bowler with the national one-day side, but has not participated in the shorter format of the game at international level since the 2015 World Cup.
Anderson was the first English bowler to reach 400, 500 and 600 wickets in Test matches. As of January 2021 he is ranked 6th in the ICC Test Bowling Rankings, having previously reached the top position at various times between 2016 and 2018. In July 2021, in the 2021 County Championship, Anderson took his 1,000th first-class wicket.