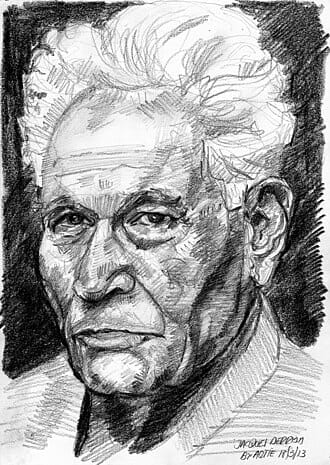 Jacques Derrida ( July 15, 1930 – October 9, 2004) was an Algerian-born French philosopher best known for developing a form of semiotic analysis known as deconstruction, which he discussed in numerous texts, and developed in the context of phenomenology. He is one of the major figures associated with post-structuralism and postmodern philosophy.During his career Derrida published more than 40 books, together with hundreds of essays and public presentations. He had a significant influence on the humanities and social sciences, including philosophy, literature, law, anthropology, historiography, applied linguistics, sociolinguistics, psychoanalysis and political theory.
His work retains major academic influence throughout the US continental Europe, South America and all other countries where continental philosophy has been predominant, particularly in debates around ontology, epistemology (especially concerning social sciences), ethics, aesthetics, hermeneutics, and the philosophy of language. In most of the Anglosphere, where analytic philosophy is dominant, Derrida’s influence is most presently felt in literary studies due to his longstanding interest in language and his association with prominent literary critics from his time at Yale.