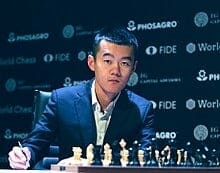 Ding Liren (born 24 October 1992) is a Chinese chess grandmaster. He is the highest rated Chinese chess player in history and is also a three-time Chinese Chess Champion. He was the winner of the 2019 Grand Chess Tour, beating Maxime Vachier-Lagrave in the finals and winning the 2019 Sinquefield Cup, as the first player since 2007 to beat Magnus Carlsen in a playoff. Ding is the first Chinese player ever to play in a Candidates Tournament and pass the 2800 Elo mark on the FIDE world rankings. In July 2016, with a Blitz rating of 2875, he was the highest rated Blitz player in the world.Ding was undefeated in classical chess from August 2017 to November 2018, recording 29 victories and 71 draws. This 100-game unbeaten streak was the longest in top-level chess history, until Magnus Carlsen surpassed it in 2019.