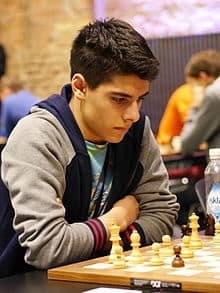 Aryan Tari (born 4 June 1999) is a Norwegian chess player. He holds the title of Grandmaster. Tari was Norwegian champion in 2015 and 2019 and won the World Junior Chess Championship in 2017. As of November 2021, he is the second-highest ranked player from Norway by FIDE, after only current World Champion Magnus Carlsen.