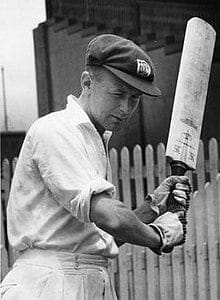 Arthur Robert Morris (19 January 1922 – 22 August 2015) was an Australian cricketer who played 46 Test matches between 1946 and 1955. An opener, Morris is regarded as one of Australia’s greatest left-handed batsmen. He is best known for his key role in Don Bradman’s Invincibles side, which made an undefeated tour of England in 1948. He was the leading scorer in the Tests on the tour, with three centuries. His efforts in the Fourth Test at Headingley helped Australia to reach a world record victory target of 404 on the final day. Morris was named in the Australian Cricket Board’s Team of the Century in 2000 and was inducted into the Australian Cricket Hall of Fame in 2001.
In his youth, Morris excelled at rugby union as well as cricket, being selected for the state schoolboys’ team in both sports. Originally trained in spin bowling, Morris developed as a batsman during his teens and during the 1940–41 season became the first player in the world to score two centuries on his first-class debut. His career was interrupted by the Second World War, during which he served in the Australian Army and gained selection in its rugby union team. Upon the resumption of cricket in 1946, Morris made his Test debut against England and quickly made himself a core member of the team. He made a century in his third match and scored twin centuries in the following Test, becoming only the second Australian to do so in an Ashes Test. His rise was such that he was made a selector during the Invincibles tour after only 18 months in the team.
After the 4–0 series win over England, which was Bradman’s farewell series, Morris became Australia’s vice-captain and was expected to be its leading batsman. He started well, scoring two centuries during Australia’s first series in the post-Bradman era, a tour to South Africa that saw Australia win the Test series 4–0. By the end of the South African tour, Morris had amassed nine Test centuries and his batting average was over 65, but thereafter his form declined. Australia increasingly fell on hard times as the core of Bradman’s team aged and retired. Morris was overlooked for the captaincy and then briefly dropped as his cricketing prowess waned. His career ended after his first wife became terminally ill. Later in his life, Morris served as a trustee of the Sydney Cricket Ground for over twenty years.
In 2017, Morris was inducted into the ICC Cricket Hall of Fame.