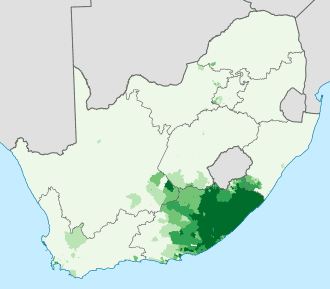 Xhosa also isiXhosa as an endonym, is a Nguni Bantu language and one of the official languages of South Africa and Zimbabwe. Xhosa is spoken as a first language by approximately 8.2 million people and by another 11 million as a second language in South Africa, mostly in Eastern Cape, Western Cape, Gauteng and Northern Cape. It has perhaps the heaviest functional load of click consonants in a Bantu language (approximately tied with Yeyi), with one count finding that 10% of basic vocabulary items contained a click.