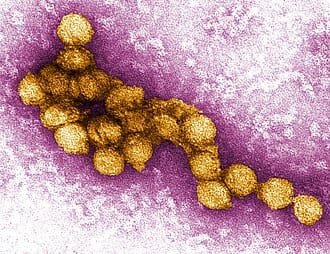 West Nile virus (WNV) is a single-stranded RNA virus that causes West Nile fever. It is a member of the family Flaviviridae, specifically from the genus Flavivirus, which also contains the Zika virus, dengue virus, and yellow fever virus. West Nile virus is primarily transmitted by mosquitoes, mostly species of Culex. The primary hosts of WNV are birds, so that the virus remains within a “bird–mosquito–bird” transmission cycle. The virus is genetically related to the Japanese encephalitis family of viruses.
Humans and horses both exhibit disease symptoms from the virus, and symptoms rarely occur in other animals. Identification of the human disease was first made in 1937 in Uganda and in the later half of the 20th century spread to many other parts of the world. Like other mosquito-born infectious diseases, there is concern that climate change will increase the spread and replication of both the host mosquitos and the virus itself.