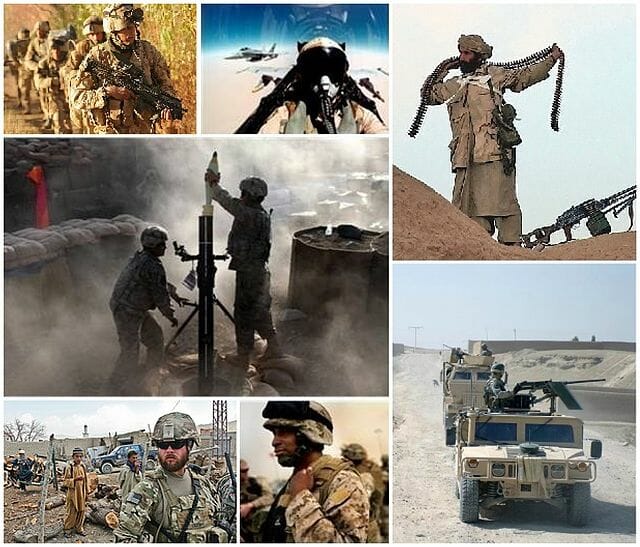 The War in Afghanistan began following the United States invasion of Afghanistan on 7 October 2001, when the United States of America and its allies successfully drove the Taliban from power in order to deny Al-Qaeda a safe base of operations in Afghanistan. Since the initial objectives were completed, a coalition of over 40 countries (including all NATO members) formed a security mission in the country called International Security Assistance Force (ISAF, succeeded by the Resolute Support Mission (RS) in 2014), of which certain members were involved in military combat allied with Afghanistan’s government. The war has afterwards mostly consisted of Taliban insurgents fighting against the Afghan Armed Forces and allied forces; the majority of ISAF/RS soldiers and personnel are American. The war is code named by the U.S. as Operation Enduring Freedom (2001–14) and Operation Freedom’s Sentinel (2015–present); it is the longest war in U.S. history.
Following the September 11 attacks in 2001 on the U.S., which was carried out by the Al-Qaeda terrorist organization led by Osama bin Laden, who was living or hiding in Afghanistan and had already been wanted since the 1998 United States embassy bombings, President George W. Bush demanded that the Taliban, who were de facto ruling Afghanistan, hand over bin Laden.

Read More About War in Afghanistan