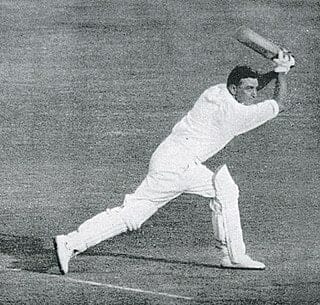 Walter Reginald Hammond (19 June 1903 – 1 July 1965) was an English first-class cricketer who played for Gloucestershire in a career that lasted from 1920 to 1951. Beginning as a professional, he later became an amateur and was appointed captain of England. Primarily a middle-order batsman, Wisden Cricketers’ Almanack described him in his obituary as one of the four best batsmen in the history of cricket. He was considered to be the best English batsman of the 1930s by commentators and those with whom he played; they also said that he was one of the best slip fielders ever. Hammond was an effective fast-medium pace bowler and contemporaries believed that if he had been less reluctant to bowl, he could have achieved even more with the ball than he did.
In a Test career spanning 85 matches, he scored 7,249 runs and took 83 wickets. Hammond captained England in 20 of those Tests, winning four, losing three, and drawing 13. His career aggregate of runs was the highest in Test cricket until surpassed by Colin Cowdrey in 1970; his total of 22 Test centuries remained an English record until Alastair Cook surpassed it in December 2012. In 1933, he set a record for the highest individual Test innings of 336 not out, surpassed by Len Hutton in 1938. In all first-class cricket, he scored 50,551 runs and 167 centuries, respectively the seventh and third highest totals by a first-class cricketer.
Although Hammond began his career in 1920, he was required to wait until 1923 before he could play full-time, after his qualification to play for Gloucestershire was challenged. His potential was spotted immediately and after three full seasons, he was chosen to visit the West Indies in 1925–26 as a member of a Marylebone Cricket Club touring party, but contracted a serious illness on the tour. He began to score heavily after his recovery in 1927 and was selected for England. In the 1928–29 series against Australia he scored 905 runs, then a record aggregate for a Test series. He dominated county cricket in the 1930s and, despite a mid-decade slump in Test form, was made captain of England in 1938. He continued as captain after the Second World War, but his health had deteriorated and he retired from first-class cricket after an unsuccessful tour of Australia in 1946–47. He appeared in two more first-class matches in the early 1950s.
Hammond was married twice, divorcing his first wife in acrimonious circumstances, and had a reputation for infidelity. His relationships with other players were difficult; teammates and opponents alike found him hard to get along with. He was unsuccessful in business dealings and failed to establish a successful career once he retired from cricket. He moved to South Africa in the 1950s in an attempt to start a business, but this came to nothing. As a result, he and his family struggled financially. Shortly after beginning a career as a sports administrator, he was involved in a serious car crash in 1960 which left him frail. He died of a heart attack in 1965.