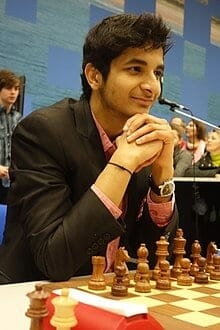 Vidit Santosh Gujrathi (born 24 October 1994) is an Indian chess player. He attained the title of Grandmaster in January 2013, becoming the 30th player from India to do so. As of August 2021, he is the second highest rated player in India (behind Viswanathan Anand), and is the fourth Indian player to have crossed the Elo rating threshold of 2700.