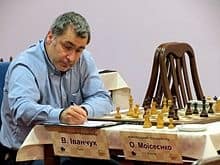 Vasyl Mykhaylovych Ivanchuk (Ukrainian: Василь Михайлович Іванчук; born March 18, 1969), also transliterated as Vassily Ivanchuk, is a Ukrainian chess player. He was awarded the title of Grandmaster by FIDE in 1988. A leading player since 1988, Ivanchuk has been ranked at No. 2 on the FIDE world rankings three times (July 1991, July 1992, October 2007).Ivanchuk has won Linares, Wijk aan Zee, Tal Memorial, Gibraltar Masters and M-Tel Masters titles. He has also won the World Blitz Championship in 2007 and the World Rapid Championship in 2016.
In 2011, by the decree of the President of Ukraine, Ivanchuk was awarded the Order of Prince Yaroslav the Wise.