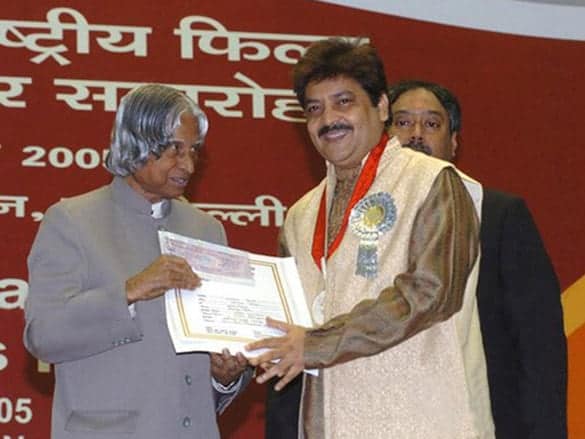 Udit Narayan (born 1 December 1955) is an Indian playback singer whose songs have been featured mainly in Bollywood movies of Hindi language. He has also sung in various other languages including Telugu, Tamil, Malayalam, Kannada, Odia, Nepali, Bhojpuri, Bengali. He has won 4 National Film Awards (of which 3 as a singer, for 2 songs in 2001, 1 each in 2002 and 2004 along with 1
as a producer in 2005) and 5 Filmfare Awards with 20 nominations among many others. He had to struggle a lot even after his debut in 1980 in Bollywood playback. He got to sing with legends Mohammed Rafi in his Bollywood Playback debut in movie Unees-Bees in 1980 and also with Kishore Kumar in the 1980s. He finally made his mark in 1988 movie Qayamat Se Qayamat Tak starring Aamir Khan and Juhi Chawla, his song “Papa Kehte Hain” was his notable performance which earned him his first Filmfare Award in the 1980s and he established himself in Bollywood Playback Singing. He is the only male singer in the history of the Filmfare Awards to have won in over three decades (the 1980s, 1990s, and 2000s).After the success of the movie Qayamat Se Qayamat Tak in 1988 which turned out to be All Time Blockbuster movie in Bollywood with more than 8 million sales of the sound track became one of the highest selling albums in the 1980s. The soundtrack was a breakthrough for the careers of Anand-Milind, as well as T-Series, one of India’s leading record labels. after which he was one of the favourites of music directors. His originality of voice was appreciated by all of the music lovers across the globe. Since his childhood he had idols as Lata Mangeshkar, Asha Bhosle, Mohammed Rafi, Kishore Kumar whom he’d listen on his radio. In the 1990s he sung for a thousands of songs including Hindi and Nepali languages. Recognising his contribution, his majesty King of Nepal Birendra Bir Bikram Shah Dev awarded him with the Prabal Gorkha Dakshin Bahu in 2001 after which for his contribution to Indian cinema and music, he was awarded the Padma Shri in 2009, and in 2016 he was awarded the Padma Bhushan by the Government of India, an honour that has been awarded to only a handful of singers, in recognition of his achievements in various film industries across India, and Chitragupta Cineyatra Samman 2015 for his contribution to Bhojpuri cinema. As many as 21 of his tracks feature in BBC’s “Top 40 Bollywood Soundtracks of all time”.