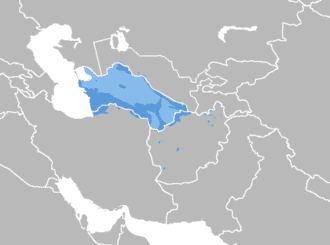 Turkmen, also referred to as Turkmen Turkic or Turkmen Turkish, is a Turkic language spoken by the Turkmens of Central Asia, mainly of Turkmenistan, Iran and Afghanistan. It has an estimated five million native speakers in Turkmenistan, a further 719,000 speakers in Northeastern Iran and 1.5 million people in Northwestern Afghanistan. Turkmen has official status in Turkmenistan, but it does not have official status in Iran or Afghanistan, where big communities of ethnic Turkmens live. Turkmen is also spoken to lesser varying degrees in Turkmen communities of Uzbekistan and Tajikistan and by diaspora communities, primarily in Turkey and Russia.