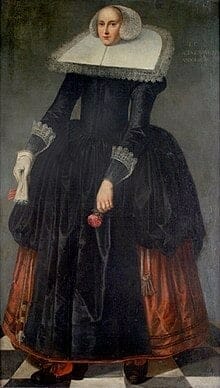 Trijntje Cornelisdochter Keever (April 10 or 16, 1616 – July 2, 1633), nicknamed De Groote Meid (in English, The Big Girl), is alleged to be the tallest female person in recorded history, standing 9 Amsterdam feet or 2.49 metres (8 ft 2 in) tall at the time of her death at age seventeen.
Trijntje Keever was the daughter of Cornelis Keever and Anna Pouwels. Cornelis was a Dutch skipper and Anna was his maid; he married her on May 24, 1605. Trijntje was born on April 10 or 16, 1616 in Edam.
Keever’s parents took her to carnivals to earn some money by letting people see her. Trijntje first received public attention when she was nine years old and had reached the height of 2 metres (6 ft 7 in). A royal company consisting of the Bohemian king Frederick V, Elector Palatine, his wife Elizabeth of Bohemia and the princess Amalia of Solms-Braunfels, living in The Hague at the time, visited her, curious about the “nine-year-old girl taller than every man in Europe.”Keever died of cancer at the age of 17 in Ter Veen. She was buried on 7 July 1633 in Edam, her town of birth. Her epitaph is said to have read, “Trijntje Crelis groote meidt oudt 17 jaer”, or, in English: “Trijntje Crelis, big girl, 17 years of age”. In the townhall of Edam is a lifesize painting by an unknown artist portraying Keever in civilian clothes with a belt holding at her right a keyring and at her left a pincushion and a sheath with a knife, fork, and spoon. The caption with the painting suggests she was portrayed more beautiful than she really was and that she probably suffered from acromegaly.
Her original shoes are also on display. If there were a size for the shoes, they would be European size 54 (36 cm or 14 inches long).
Despite her height compared to Zeng Jinlian her height remains unverified by many sources, but she is considered by many as the tallest woman in reported history and seventh-tallest person ever, behind Robert Wadlow, John Rogan, John F. Carroll
Franz Winkelmeier, Leonid Stadnyk and Julius Koch. She was the tallest person ever until Franz Winkelmeier.

151 Tallest Men in the World

Tallest Men in the World: You will find all kinds of people in this world. Some are tall, some are short, some are fat and some are thin. You will find the tallest and shortest person in the world. Some of these will be so long that you will come to their waist, while some…