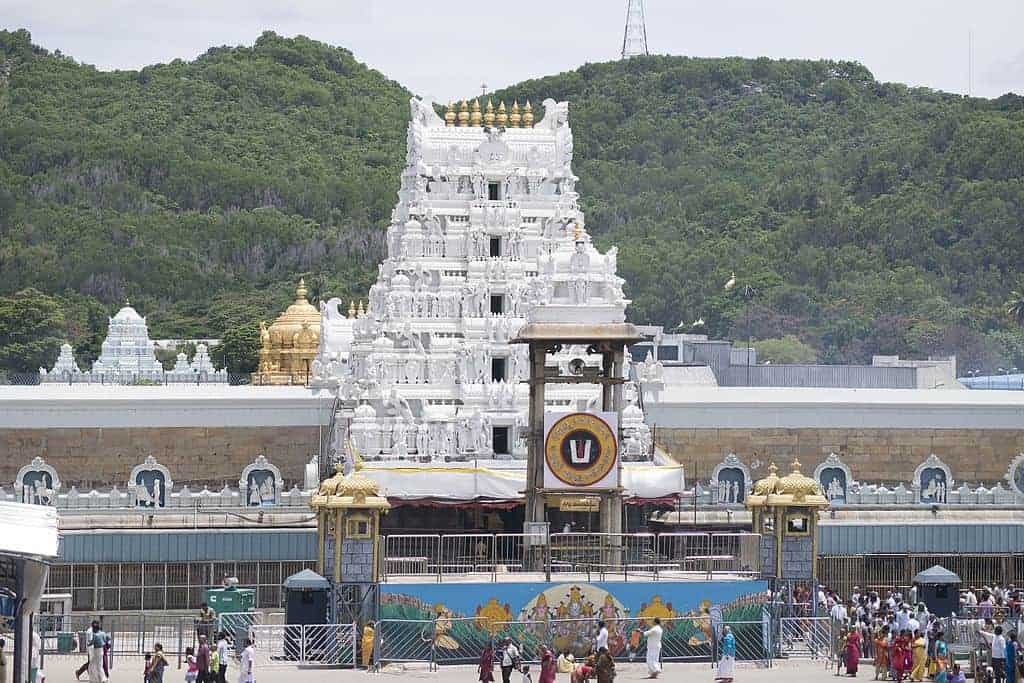 Venkateswara Temple is a Hindu temple situated in the hill town of Tirumala at Tirupati in Chittoor district of Andhra Pradesh, India. The Temple is dedicated to Venkateswara, a form of Vishnu, who is believed to have appeared here to save mankind from trials and troubles of Kali Yuga. Hence the place has also got the name Kaliyuga Vaikuntham and the Lord here is referred to as Kaliyuga Prathyaksha Daivam. The temple is also known by other names like Tirumala Temple, Tirupati Temple, Tirupati Balaji Temple. Venkateswara is known by many other names: Balaji, Govinda, and Srinivasa.The temple is run by body Tirumala Tirupati Devasthanams (TTD) which is under direct control of Andhra Pradesh Government. The head of TTD is appointed by Andhra Pradesh Government. The revenue from this shrine is used by Andhra Pradesh government.Tirumala Hills are part of Seshachalam Hills range. The hills are 853 metres (2,799 ft) above sea level. The Hills comprises seven peaks, representing the seven heads of Adisesha. The temple lies on the seventh peak -Venkatadri, on the southern banks of Sri Swami Pushkarini, a holy water tank. Hence the temple is also referred to as “Temple of Seven Hills”. Tirumala town covers about 10.33 sq mi (26.75 km2) in area.
The Temple is constructed in Dravidian architecture and is believed to be constructed over a period of time starting from 300 AD. The Garbagruha (Sanctum Sanctorum) is called AnandaNilayam. The presiding deity, Venkateswara, is in standing posture and faces east in Garbha gruha. The temple follows Vaikhanasa Agama tradition of worship. The temple is one of the eight Vishnu Swayambhu Kshetras and is listed as 106th and the last earthly Divya Desam. The Temple premises had two modern Queue complex buildings to organise the pilgrim rush, Tarigonda Vengamamba Annaprasadam complex for free meals to Pilgrims, hair tonsure buildings and a number of pilgrim lodging sites.
It is the richest temple in the world in terms of donations received and wealth. The temple is visited by about 50,000 to 100,000 pilgrims daily (30 to 40 million people annually on average), while on special occasions and festivals, like the annual Brahmotsavam, the number of pilgrims shoots up to 500,000, making it the most-visited holy place in the world.. In 2016, it was reported that 27.3 million pilgrims visited the temple.It is around 435 km (270.3 mi) from Vijayawada, 571.9 km (355.4 mi) from Hyderabad, 138 km (85.7 mi) from Chennai, 291 km (180.8 mi) from Bangalore, and 781.2 km (485.4 mi) from Visakhapatnam
There are several legends associated with the manifestation of the Lord in Tirumala. According to one legend, the temple has a murti (deity) of Venkateswara, which it is believed shall remain here for the entire duration of the present Kali Yuga.