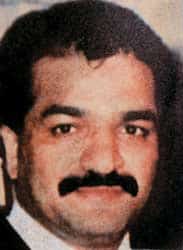 Ibrahim Mushtaq Abdul Razzaq Memon (born 24 November 1960), better known by the nickname Tiger Memon, is an alleged Indian terrorist, reckoned to be one of the primary master-minds behind the 1993 Mumbai bomb blasts case. He is wanted by Interpol and the Central Bureau of Investigation (CBI). He is a member of D-Company, a gang led by Dawood Ibrahim. He got the nickname Tiger after helping a petty drugs and weapons smuggler to evade the crime branch of Mumbai Police by driving his car recklessly over 100 km/h on one-way roads.