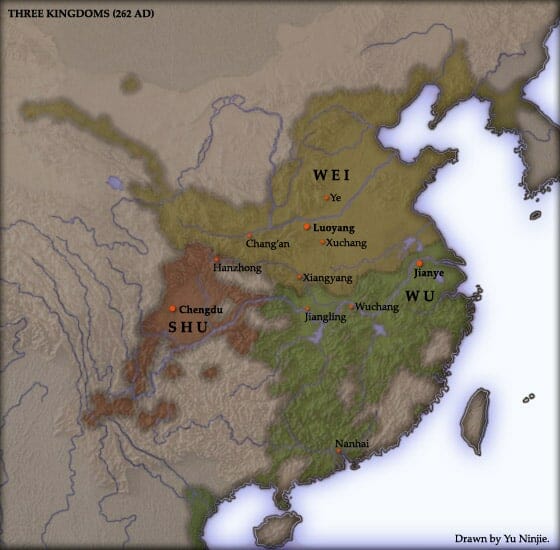 The Three Kingdoms  from 220 to 280 AD was the tripartite division of China among the states of Wei, Shu, and Wu. The Three Kingdoms period started with the end of the Han dynasty and was followed by the Jin dynasty. The short-lived Yan kingdom in the Liaodong Peninsula, which lasted from 237 to 238, is sometimes considered as a “4th kingdom”.To distinguish the three states from other historical Chinese states of the same names, historians have added a relevant character to the state’s original name: the state that called itself “Wei” (魏) is also known as “Cao Wei” (曹魏), the state that called itself “Han” (漢) is also known as “Shu Han” (蜀漢) or just “Shu” (蜀), and the state that called itself “Wu” (吳) is also known as “Eastern Wu” (東吳; Dōng Wú) or “Sun Wu” (孫吳).
Academically, the period of the Three Kingdoms refers to the period between the foundation of the state of Wei in 220 AD and the conquest of the state of Wu by the Jin dynasty in 280. The earlier, “unofficial” part of the period, from 184 to 220, was marked by chaotic infighting between warlords (军阀) in various parts of China. The middle part of the period, from 220 to 263, was marked by a more militarily stable arrangement between three rival states of Wei, Shu, and Wu. The later part of the era was marked by the conquest of Shu by Wei (263), the usurpation of Wei by the Jin dynasty (265), and the conquest of Wu by the Jin (280).