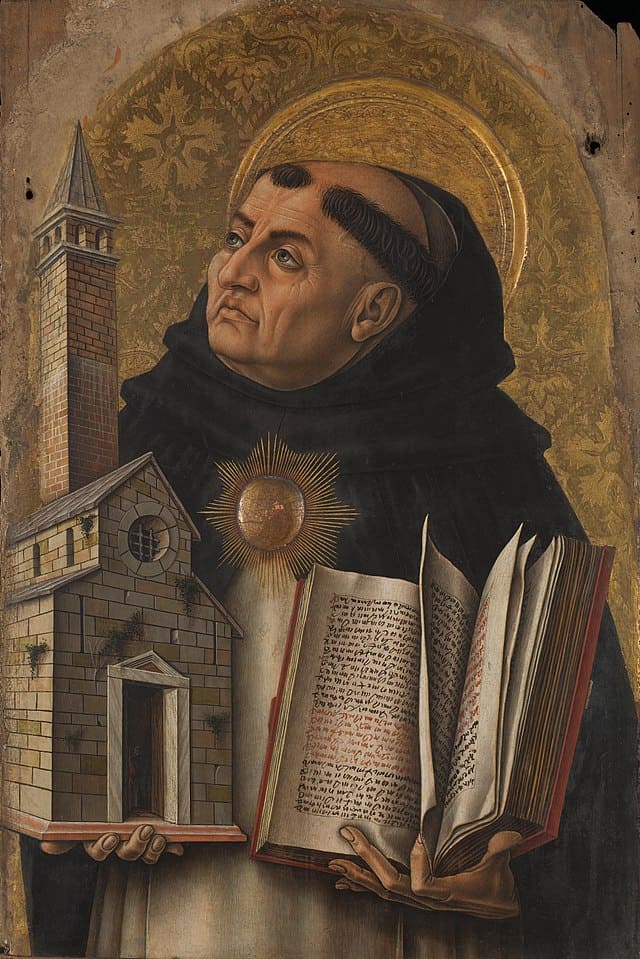 Thomas Aquinas ( 1225 – 7 March 1274) was an Italian Dominican friar, philosopher, Catholic priest, and Doctor of the Church. An immensely influential philosopher, theologian, and jurist in the tradition of scholasticism, he is also known within the latter as the Doctor Angelicus and the Doctor Communis. The name Aquinas identifies his ancestral origins in the county of Aquino in present-day Lazio, Italy. He was the foremost classical proponent of natural theology and the father of Thomism; of which he argued that reason is found in God. His influence on Western thought is considerable, and much of modern philosophy developed or opposed his ideas, particularly in the areas of ethics, natural law, metaphysics, and political theory.
Unlike many currents in the Church of the time, Thomas embraced several ideas put forward by Aristotle—whom he called “the Philosopher”—and attempted to synthesize Aristotelian philosophy with the principles of Christianity.His best-known works are the Disputed Questions on Truth (1256–1259), the Summa contra Gentiles (1259–1265), and the unfinished but massively influential Summa Theologica a.k.a. Summa Theologiae (1265–1274). His commentaries on Scripture and on Aristotle also form an important part of his body of work. Furthermore, Thomas is distinguished for his eucharistic hymns, which form a part of the Church’s liturgy. The Catholic Church honors Thomas Aquinas as a saint and regards him as the model teacher for those studying for the priesthood, and indeed the highest expression of both natural reason and speculative theology. In modern times, under papal directives, the study of his works was long used as a core of the required program of study for those seeking ordination as priests or deacons, as well as for those in religious formation and for other students of the sacred disciplines (philosophy, Catholic theology, church history, liturgy, and canon law).Thomas Aquinas is considered one of the Catholic Church’s greatest theologians and philosophers. Pope Benedict XV declared: “This (Dominican) Order … acquired new luster when the Church declared the teaching of Thomas to be her own and that Doctor, honored with the special praises of the Pontiffs, the master and patron of Catholic schools.” The English philosopher Anthony Kenny considers Thomas to be “one of the dozen greatest philosophers of the western world”.