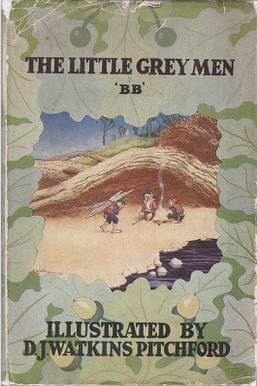 The Little Grey Men: A story for the young in heart is a children’s fantasy novel written by Denys Watkins-Pitchford under the nom de plume “BB” and illustrated by the author under his real name. It was first published by Eyre & Spottiswoode in 1942 and it has been reissued several times. Set in the English countryside, it features the adventures of four gnomes who may be the last of their race. At the same time it features the countryside during three seasons of the year.
Watkins-Pitchford won the 1942 Carnegie Medal recognising The Little Grey Men as the year’s best children’s book by a British subject.A sequel was published in 1948, Down the Bright Stream; later issued as The Little Grey Men Go Down the Bright Stream (Methuen, 1977). Jointly they may be called the Little Grey Men series.The original novel was adapted for television in 1975.