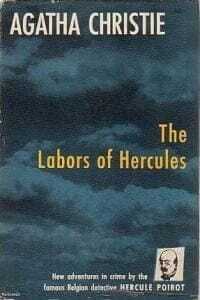 The Labours of Hercules is a short story collection written by Agatha Christie and first published in the US by Dodd, Mead and Company in 1947 and in the UK by Collins Crime Club in September of the same year. The US edition retailed at $2.50 and the UK edition at eight shillings and sixpence (8/6, 42½p).It features the Belgian detective Hercule Poirot and gives an account of twelve cases with which he intends to close his career as a private detective. His regular associates (his secretary, Miss Felicity Lemon, and valet, George/Georges) make cameo appearances, as does Chief Inspector Japp. The stories were all first published in periodicals between 1939 and 1947.
In the foreword, Poirot declares that he will carefully choose the cases to conform to the mythological sequence of the Twelve Labours of Hercules. In some cases (such as “The Nemean Lion”), the connection is a highly tenuous one, while in others the choice of case is more or less forced upon Poirot by circumstances. By the end, “The Capture of Cerberus” has events that correspond with the twelfth labour with almost self-satirical convenience.

Read More About The Labours of Hercules

Lists containing The Labours of Hercules :