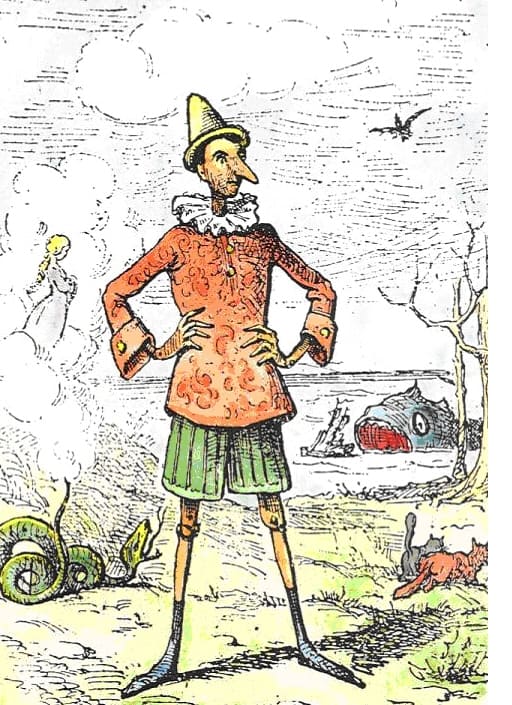 The Adventures of Pinocchio ( pi-NOH-kee-oh; Italian: Le avventure di Pinocchio [le avːenˈtuːre d̪i piˈnɔkːjo]) (commonly shortened to Pinocchio) is a novel for children by Italian author Carlo Collodi, written in Pescia. It is about the mischievous adventures of an animated marionette named Pinocchio and his father, a poor woodcarver named Geppetto.
It was originally published in a serial form as The Story of a Puppet (Italian: La storia di un burattino) in the Giornale per i bambini, one of the earliest Italian weekly magazines for children, starting from 7 July 1881. The story stopped after nearly 4 months and 8 episodes at Chapter 15, but by popular demand from readers, the episodes were resumed on 16 February 1882. In February 1883, the story was published in a single book. Since then, the spread of Pinocchio on the main markets for children’s books of the time has been continuous and uninterrupted, and it was met with enthusiastic reviews worldwide.A universal icon and a metaphor of the human condition, the book is considered a canonical piece of children’s literature and has had great impact on world culture. Philosopher Benedetto Croce reputed it as one of the greatest works of Italian literature. Since its first publication, it has inspired hundreds of new editions, stage plays, merchandising, television series and movies, such as Walt Disney’s iconic animated version, and commonplace ideas such as a liar’s long nose.
According to an extensive research done by the Fondazione Nazionale Carlo Collodi and based on UNESCO sources in the late 1990s, the book has been translated between 240 and 260 languages worldwide. That makes it one of the most translated books in the world. It is considered one of the best-selling books ever published, althought the total sales since its first publication are unknown because of the many public domain re-releases begun in 1940; according to Viero Peroncini: “some sources report 35 million [copies sold], others 80, but it is only a way … to quantifying an unquantifiable success”. According to Francelia Butler, it also remains “the most translated Italian book and, after the Bible, the most widely read”.

Read More About The Adventures of Pinocchio

Lists containing The Adventures of Pinocchio :