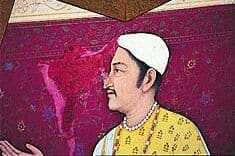 Tansen (c. 1493/1500 – 1586), also referred to as Tan Sen or Ramtanu, was a prominent figure of Hindustani classical music. Born in a Hindu family, he learned and perfected his art in the northwest region of modern Madhya Pradesh. He began his career and spent most of his adult life in the court and patronage of the Hindu king of Rewa, Raja Ramchandra Singh (r.1555–1592), where Tansen’s musical abilities and studies gained widespread fame. This reputation brought him to the attention of the Mughal Emperor Akbar, who sent messengers to Raja Ramchandra Singh, requesting Tansen to join the musicians at the Mughal court. Tansen did not want to go, but Raja Ramchandra Singh encouraged him to gain a wider audience, and sent him along with gifts to Akbar. In 1562, about the age of 60, the Vaishnava musician Tansen joined the Akbar court, and his performances became a subject of many court historians.Numerous legends have been written about Tansen, mixing facts and fiction, and the historicity of these stories is doubtful. Akbar considered him as one of the Navaratnas (nine jewels), and gave him the title Mian, an honorific, meaning learned man.Tansen was a composer, musician and vocalist, to whom many compositions have been attributed in northern regions of the Indian subcontinent. He was also an instrumentalist who popularized and improved musical instruments.