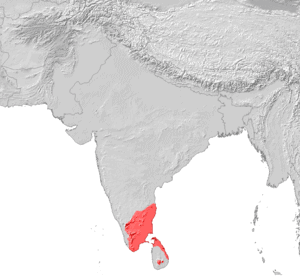 Tamil is a Dravidian language natively spoken by the Tamil people of South Asia. Tamil is the official language of the Indian state of Tamil Nadu, as well as two sovereign nations, Singapore and Sri Lanka. In India, it is also the official language of the Union Territory of Puducherry. Tamil is spoken by significant minorities in the four other South Indian states of Kerala, Karnataka, Andhra Pradesh and Telangana and the Union Territory of the Andaman and Nicobar Islands. It is also spoken by the Tamil diaspora found in many countries, including Malaysia, South Africa, United Kingdom, United States, Canada, Australia and Mauritius. Tamil is also natively spoken by Sri Lankan Moors.