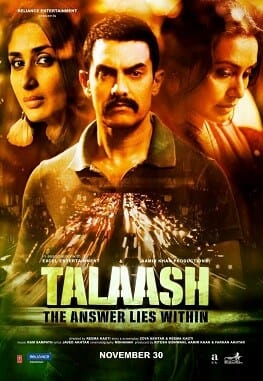 Talaash: The Answer Lies Within (transl. Search) is a 2012 Indian Hindi-language psychological crime thriller film written and directed by Reema Kagti, co-written by Zoya Akhtar, and produced by Ritesh Sidhwani and Farhan Akhtar under Excel Entertainment and Aamir Khan under Aamir Khan Productions, with Reliance Entertainment serving as distributor and presenter. The film stars Khan, Kareena Kapoor and Rani Mukerji in lead roles with Nawazuddin Siddiqui, Rajkummar Rao and Shernaz Patel in supporting roles. The film score and soundtrack of the film were composed by Ram Sampath, with lyrics written by Javed Akhtar. Principal photography of the film took place during March–November 2011, primarily in Mumbai, Pondicherry and London. The film was released on 30 November 2012. Talaash: The Answer Lies Within had worldwide earnings of over ₹174.21 crore (US$23 million), becoming one of the highest-grossing Indian films in 2012.

Read More About Talaash: The Answer Lies Within (2012)