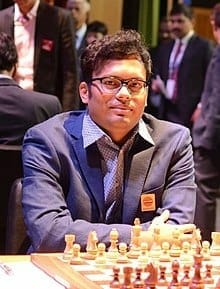 Surya Sekhar Ganguly (born 24 February 1983; Kolkata, India) is an Indian chess grandmaster. His peak ELO rating was 2676 (July, 2016). Ganguly became an International Master at the age of 16 and a grandmaster at the age of 19.
He has won 40 individual gold, 21 individual silver and 6 individual bronze medals in National as well as International tournaments. He was also the captain of the Indian team in the Asian Nations Online Cup 2020 which won the 2nd place. In addition, in team competitions he has won 12 gold, four silver and three bronze medals. Some of his recent achievements are winning individual gold in Hunan International Open (2019), individual gold in World Team Championship in Astana, Kazakhstan (2019), gold in National Team Championship Kolkata (2019), bronze in Binhai International Open, China (2018) and bronze in Asian Team Championship in both Classical and Rapid in Iran (2018).The government of India has awarded him the prestigious Arjuna Award in 2005 for his outstanding achievement in sports. He was awarded ″Bangabhusan″, the second-highest civilian award of West Bengal, in 2015. He was also awarded the “Khel Samman” award in 2013 from the Government of West Bengal and the “Shera Bangali” award in 2009 as the best Sportsperson of Bengal.
He was six-time National champion (2003–2008) and Asian champion in 2009. He worked in the team of seconds that assisted Viswanathan Anand in winning the World Championship matches against Vladimir Kramnik, Veselin Topalov and Boris Gelfand in 2008, 2010 and 2012 respectively.