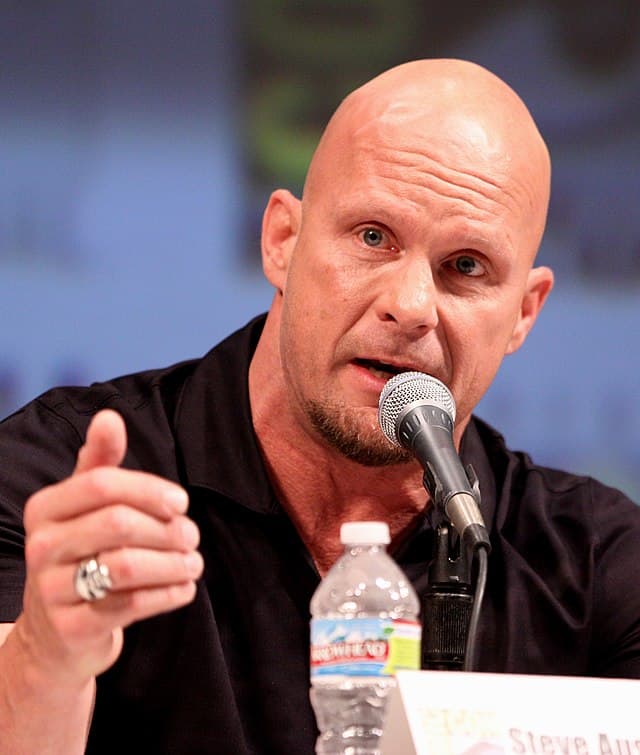 Steve Austin (born Steven James Anderson; December 18, 1964; later Steven James Williams), better known by the ring name Stone Cold Steve Austin, is an American actor, producer, television host, and retired professional wrestler.
Austin started his professional wrestling career after playing college football at the University of North Texas. He became “Stunning” Steve Austin in World Championship Wrestling (WCW) from 1991 to 1995, using the character of a handsome man who relied on his good looks and flowing blonde hair. After a brief stint in Extreme Championship Wrestling (ECW) in late 1995, he signed with the World Wrestling Federation (WWF, now WWE) under the ring name of The Ringmaster. The following year, having grown a goatee and shaved his head due to going bald, he was repackaged as “Stone Cold” Steve Austin. After this character change, he gained significant mainstream popularity as a brash, vulgar, beer-drinking antihero who routinely defied the establishment and his boss, WWE chairman Vince McMahon. Austin thus became the “poster boy” of the Attitude Era, a boom period in the company’s business and popularity in the late 1990s and early 2000s. He was forced to retire from in-ring competition in 2003 due to multiple knee injuries and a serious neck injury. Throughout the rest of 2003 and 2004, he was featured as the on-screen Co-General Manager and Sheriff of Raw.
Austin held 19 championships throughout his wrestling career. He is a six-time WWF Champion, a two-time WWF Intercontinental Champion, a four-time WWF Tag Team Champion and a one-time Million Dollar Champion in WWE. In WCW, he was a two-time WCW World Television Champion, a two-time WCW United States Heavyweight Champion, a one-time WCW World Tag Team Champion, and a one-time NWA World Tag Team Champion. In addition, he is the fifth-ever WWE Triple Crown Champion, the winner of the 1996 WWF King of the Ring tournament and a record three-time Royal Rumble winner. Austin headlined multiple WWE pay-per-view events, including three WrestleManias (XIV, XV, and X-Seven). He was inducted into the WWE Hall of Fame in 2009.
Prominent WWE figures, such as Vince McMahon, have declared Austin to be the biggest star in the company’s history, even surpassing the popularity of Hulk Hogan. Veteran professional wrestling journalist Wade Keller remarked that Austin is “in every conversation for the greatest wrestling act of all time”, as well as for “the most profitable and the most influential”. Numerous people, including Hulk Hogan, Ric Flair, Dwayne Johnson, John Cena and The Undertaker, have placed Austin on their “Mount Rushmore of Pro Wrestling”.
Following his professional wrestling career, Austin started a podcast named The Stone Cold Podcast. He released his own IPA beer called the “Broken Skull IPA”. In addition, Austin hosted reality competition series, Steve Austin’s Broken Skull Challenge, from 2014 to 2017 and has been the star of Straight Up Steve Austin since 2019.