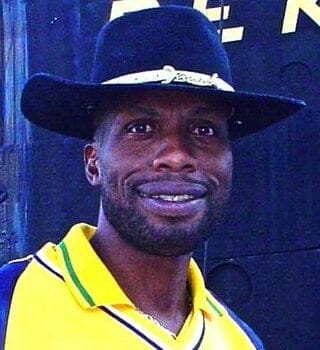 Sir Curtly Elconn Lynwall Ambrose KCN (born 21 September 1963) is an Antiguan former cricketer who played 98 Test matches for the West Indies. Widely acknowledged as one of the greatest fast bowlers of all time, he took 405 Test wickets at an average of 20.99 and topped the ICC Player Rankings for much of his career to be rated the best bowler in the world. His great height—he is 6 feet 7 inches (2.01 m) tall—allowed him to make the ball bounce unusually high after he delivered it; allied to his pace and accuracy, it made him a very difficult bowler for batsmen to face. A man of few words during his career, he was notoriously reluctant to speak to journalists. He was chosen as one of the Wisden Cricketers of the Year in 1992; after he retired he was entered into the International Cricket Council Hall of Fame and selected as one of West Indies all-time XI by a panel of experts.
Born in Swetes, Antigua, Ambrose came to cricket at a relatively late age, having preferred basketball in his youth, but quickly made an impression as a fast bowler. Progressing through regional and national teams, he was first chosen for the West Indies in 1988. He was almost immediately successful and remained in the team until his retirement in 2000. On many occasions, his bowling spells were responsible for winning matches for West Indies which seemed lost, in association with Courtney Walsh. Against Australia in 1993, he bowled one of the greatest bowling spells of all time, when he took seven wickets while conceding a single run, hence taking figures of 7/1 for the first spell of the match. Similarly, in 1994 he was largely responsible for bowling England out for 46 runs, taking six wickets for 24 runs. He is rightly regarded as one of the greatest match-winning bowlers of all time.
Ambrose’s bowling method relied on accuracy and conceding few runs; several of his best performances came when he took wickets in quick succession to devastate the opposition. He was particularly successful against leading batsmen. From 1995, Ambrose was increasingly affected by injury, and several times critics claimed that he was no longer effective. However, he continued to take wickets regularly up until his retirement, although he was sometimes less effective in the early matches of a series. In his final years, the West Indies team was in decline and often relied heavily on Ambrose and Walsh; both men often bowled with little support from the other bowlers. Following his retirement, Ambrose has pursued a career in music as the bass guitarist in a reggae band.