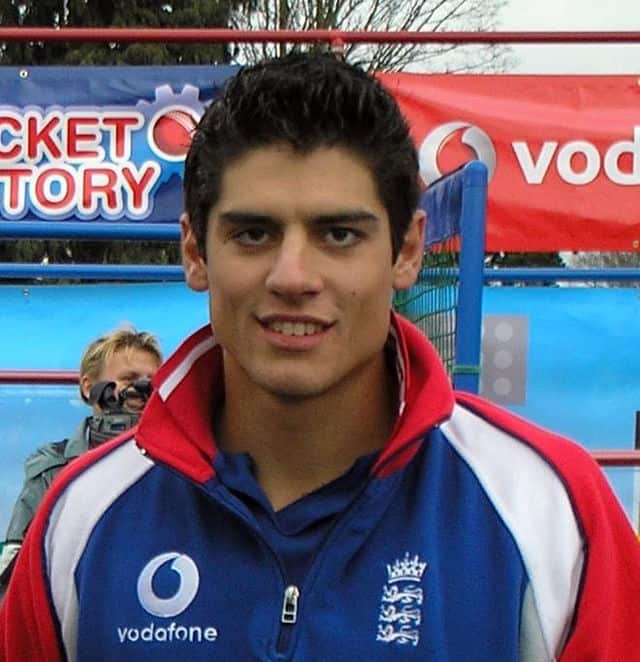 Sir Alastair Nathan Cook (born 25 December 1984) is an English cricketer who plays for Essex County Cricket Club, and played for England in all international formats until retiring in 2018. A former captain of the England Test and One-Day International (ODI) teams, he is the fifth-highest Test run scorer of all time and holds a number of English and international records.
Cook is England’s second most-capped Test player and has captained the English team in 59 Tests, as well as in 69 ODIs. He is the leading run-scorer in Test matches for England, and the youngest player to score 12,000 Test runs (the sixth overall, and the only Englishman). Cook has scored a record 33 Test centuries for England and is the first England player to win 50 Test matches. A left-handed opening batsman (the highest-scoring left-hander in Tests), he normally fields at first slip.
Cook played for Essex’s Academy and made his debut for the first XI in 2003. He played in several of England’s youth teams from 2000 until his call up to the Test side in 2006. While touring in the West Indies with the ECB National Academy, Cook was called up to the England national team in India as a last-minute replacement for Marcus Trescothick and debuted, aged 21, with a century. He went on to score 1,000 runs in his maiden year and made centuries in his first Test matches against India, Pakistan, the West Indies and Bangladesh. Cook played a pivotal role in England winning the 2009 Ashes series, and, after deputising as Test captain in 2010 and then taking ODI captaincy full-time, in retaining the Ashes in 2010-11.
He was appointed captain of the Test team after Andrew Strauss’s retirement on 29 August 2012. Cook captained England to its first Test series victory in India since 1984–85. During the tour he became the first captain to score a century in each of his first five Tests in charge. On 30 May 2015, Cook became the leading run-scorer in Test matches for England, surpassing Graham Gooch (8900). After England’s 2016 tour of Bangladesh and India, he stepped down as Test captain. Cook was appointed MBE in 2011 and promoted to CBE in 2016 for services to cricket. On 24 May 2018 during the first Test against Pakistan, Cook equalled Allan Border’s record for appearing in the greatest number of consecutive Test matches, with 153, surpassing it a week later in the second Test at Headingley. On 3 September 2018, Cook announced that his twelve-year international career would end at the conclusion of the series against India on 11 September 2018. In the 2019 New Year Honours, Cook was appointed a Knight Bachelor for services to cricket.On the occasion of England’s 1000th Test in August 2018, he was named in the country’s greatest Test XI by the ECB.