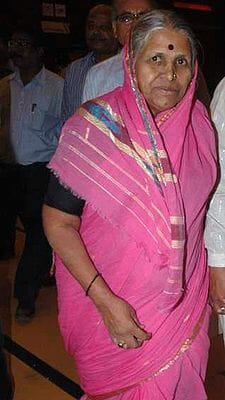 Sindhutai Sapkal is an Indian social worker and social activist known particularly for her work in raising orphaned children in India. She was conferred the Padma Shri in 2021 in Social Work category.

Sapkal was born on 14 November 1948 in a cattle grazing family in Maharashtra’s Wardha district. Being an unwanted child, she was referred to as Chindhi (Marathi for “torn piece of cloth”). Abject poverty, family responsibilities and an early marriage forced her to quit formal education after she successfully passed the 4th standard. At the age of twelve, Sapkal was married to a man twenty years her senior in Wardha District. In her new home, she fought against the exploitation of local women, who collected cow dung, by the forests department and landlords. She bore three sons by the time she turned twenty. At the young age of twenty, when nine-months pregnant, Sapkal was beaten and left to die by her husband. She gave birth to a baby girl in a semi-conscious state in a cow shelter outside their house on the night of 14 October 1973. Sapkal took to begging on the streets and railway platforms to survive. Because she feared being picked up by men at night, she often spent the night at cemeteries. Such was her condition that people called her a ghost since she was seen at night in the cemeteries.