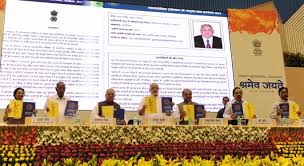 The purpose of Shramev Jayate is to implement a project smoothly, increase the product and generate maximum employment, while also taking care of the interests of the workers and developing the enterprise of the industry.

Some highlights of the program…

1. There will be labor facility i.e. Unified Labor Portal under which 6-7 lakh industries will have the facility of self-certification and filling single online returns. There will also be a responsible labor inspection plan.

2. A UAN i.e. Universal Account Number will be available for the PPF of the workers, which will not change even after changing the company.

3. Vocational training facilities will be provided which will be decided according to local demand and requirements.

4. Apprentice incentive scheme will also be part of this, under which it will be easier for youth to get employment.

5. The National Health Insurance Scheme will also be applied to the workers in the unorganized sector.