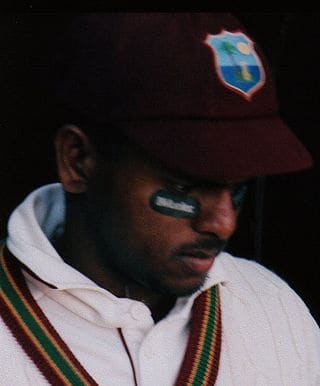 Shivnarine “Shiv” Chanderpaul (born 16 August 1974) is a Guyanese former cricketer of Indian descent and former West Indian international cricketer and captain of the West Indies cricket team. Considered one of the greatest batsmen of his era, Chanderpaul is the first Indo-Caribbean to play 100 Tests for the West Indies.
Chanderpaul captained West Indies in 14 Tests and 16 One Day Internationals. A left-handed batsman, Chanderpaul is well known for his unorthodox batting stance, which has been described as crab-like. He has scored 20,000 runs in international cricket, and in 2008 he was named as one of the five Cricketers of the Year by the Wisden Cricketers’ Almanack, and awarded Sir Garfield Sobers Trophy (ICC Cricketer of the Year) by the International Cricket Council.
He made his international debut at the age of 19, but did not score a century in international cricket for three years, prompting some criticism. Early in his career, he was plagued by injuries, and was even dubbed a hypochondriac until he had a piece of floating bone removed from his foot in 2000. Since then he has enjoyed consistent form, scoring over 11,000 runs in Test cricket and is currently the 8th highest run scorer of all time in the format.Due to poor performances, Chanderpaul was dropped from the West Indies squad in 2015. After that, he announced his retirement from international cricket in 2016, without a farewell, at the age of 41.