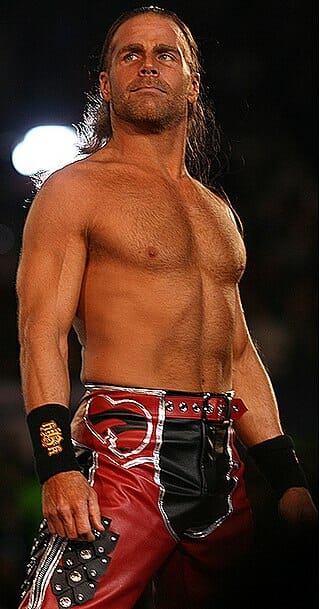 Michael Shawn Hickenbottom (born July 22, 1965), better known by his ring name Shawn Michaels, is an American retired professional wrestler, actor, and television presenter. Regarded as one of the greatest professional wrestlers in history, he is known by the nicknames “Heartbreak Kid”, “The Showstopper”, and “Mr. WrestleMania”.
Michaels wrestled consistently for WWE, formerly the World Wrestling Federation (WWF), from 1988 until a back injury forced his first retirement in 1998. He performed in non-wrestling roles for the next two years and returned to the ring for a match in his own Texas Wrestling Academy (TWA) in 2000. Michaels resumed his wrestling career with WWE in 2002 and retired ceremoniously in 2010, before being assigned as a trainer in 2016. He returned for a final match in 2018.
In the WWF/WWE, Michaels headlined pay-per-view events between 1989 and 2018, main-eventing the company’s flagship annual event, WrestleMania, five times. He was the co-founder and original leader of the successful stable, D-Generation X. Michaels also wrestled in the American Wrestling Association (AWA), where he founded The Midnight Rockers with Marty Jannetty in 1985. After winning the AWA World Tag Team Championship twice, the team continued to the WWF as The Rockers and had a high-profile breakup in January 1992. Within the year, Michaels twice challenged for the WWF Championship and won his first Intercontinental Championship, heralding his arrival as one of the industry’s premier singles stars.
Michaels is a four-time world champion, having held the WWF Championship three times and WWE’s World Heavyweight Championship once. He is also a two-time Royal Rumble winner (and the first man to win the match as the number one entrant), the first WWF Grand Slam Champion and the fourth WWF Triple Crown Champion, as well as a two time WWE Hall of Fame inductee (2011 as singles wrestler and 2019 as part of D-Generation X). Michaels won the Pro Wrestling Illustrated “Match of the Year” reader vote a record eleven times, and his match against John Cena on April 23, 2007, was ranked by WWE as the best match ever aired on the company’s flagship Raw program.