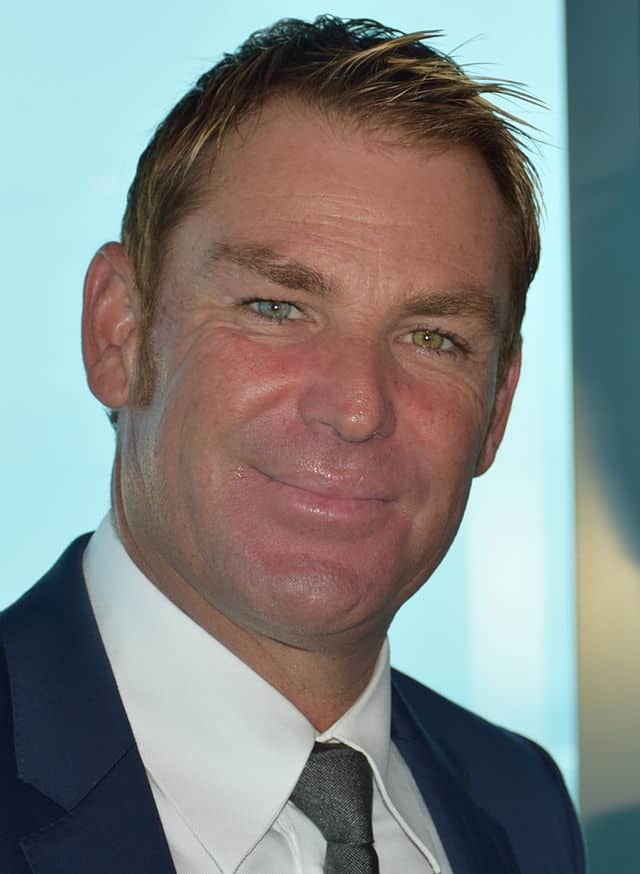 Shane Keith Warne (born 13 September 1969) is an Australian cricket commentator and former international cricketer who captained the Australian national team in One Day Internationals (ODI). Widely considered one of the greatest bowlers in cricket history, Warne was named one of the Wisden Cricketers of the Year in the 1994 Wisden Cricketers’ Almanack. He was the Wisden Leading Cricketer in the World in 1997 (Notional Winner). He was banned from the sport in 2003 for testing positive for a prohibited substance. Following the ban, he was named Wisden Leading Cricketer in the World for the year 2004 in the 2005 Wisden Cricketers’ Almanack. In 2000, he was selected by a panel of cricket experts as one of the five Wisden Cricketers of the Century, the only specialist bowler selected in the quintet, and the only one still playing at the time. He officially retired from all formats of cricket in July 2013.As well as playing internationally, Warne played domestic cricket for his home state of Victoria and English domestic cricket for Hampshire. He was captain of Hampshire for three seasons from 2005 to 2007. Warne played his first Test match in 1992 and took over 1,000 international wickets (in Tests and One-Day Internationals), second to this milestone after Sri Lanka’s Muttiah Muralitharan. Warne’s 708 Test wickets was the record for the most wickets taken by any bowler in Test cricket until it was broken by Muralitharan on 3 December 2007. A useful lower-order batsman, Warne is also the only player to have scored more than 3,000 Test runs without a career century. His career was plagued by scandals off the field, including a ban from cricket for testing positive for a prohibited substance, charges of bringing the game into disrepute by accepting money from bookmakers and sexual indiscretions.
He retired from international cricket in January 2007 at the end of Australia’s 5–0 Ashes series victory over England. Three other players integral to the Australian team at the time—Glenn McGrath, Damien Martyn and Justin Langer—also retired from Tests at the same time, which led some, including the Australian captain Ricky Ponting, to declare it the “end of an era”.He was named as a bowler in Australia’s “greatest ever ODI team”. In a fan poll conducted by the Cricketers’ Almanack in 2017, he was named in the country’s best Ashes XI in the last 40 years. To mark 150 years of the Cricketers’ Almanack, Wisden named him in an all-time Test World XI.Following his retirement from international cricket, Warne played a full season at Hampshire in 2007. He had been scheduled to appear in the 2008 English cricket season, but in late March 2008 he announced his retirement from playing first-class cricket in order to be able to “spend more time pursuing interests outside of cricket”. He played in the first four seasons (2008–2011) of the Indian Premier League for the Rajasthan Royals, where he played the roles of both captain and coach. He led his team to victory against the Chennai Super Kings in the final of the 2008 season. In February 2018, the Rajasthan Royals appointed Warne as their team mentor for the IPL 2018.In 2013, Warne was inducted into the ICC Cricket Hall of Fame. In 2012, he was also inducted into the Cricket Hall of Fame by Cricket Australia.