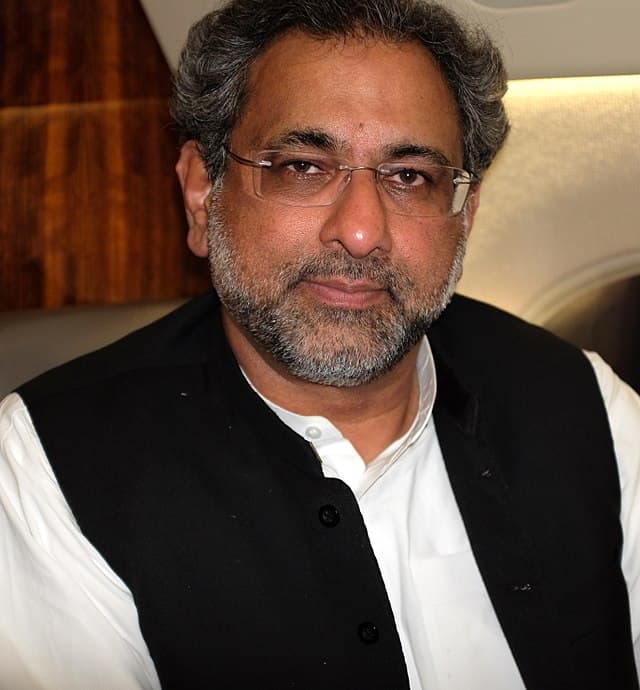 Shahid Khaqan Abbasi (Urdu: شاہد خاقان عباسی‎; born 27 December 1958) is a Pakistani politician and businessman who served as the 21st Prime Minister of Pakistan from August 2017 to May 2018. Abbasi was born in Gujranwala. Later on, he moved to Islamabad and became the Senior Vice President of the Pakistan Muslim League (Nawaz) (PML-N), and Secretary General of Pakistan Democratic Movement (PDM), an anti-establishment coalition of political parties in Pakistan. He has been a Member of the National Assembly of Pakistan since October 2018. Previously, he was a member of the National Assembly from 1988 to 1999 and again from 2008 to 2018.
Born in 1958 in Karachi to Khaqan Abbasi, Abbasi was educated at Lawrence College, Murree. He earned a bachelor’s degree from the University of California, Los Angeles, before obtaining a master’s degree from George Washington University. Prior to entering politics, he worked as a professional engineer in various projects in the United States and the Middle East.
Abbasi started his political career after the death of his father in 1988, and since then he has been elected a Member of the National Assembly six times for Constituency NA-50 (Rawalpindi). After the PML-N victory in the 1997 general election, he served as Chairman of Pakistan International Airlines until the 1999 Pakistani coup d’état. After the formation of a temporary coalition government following the 2008 general election, he was briefly the Minister for Commerce in the Gillani ministry. After the 2013 general election, he became the Minister for Petroleum and Natural Resources in the third Sharif ministry, where he served from 2013 until the disqualification of Prime Minister Nawaz Sharif after the Panama Papers case decision in July 2017. In August 2017, he was elected as 21st Prime Minister of Pakistan by the National Assembly.