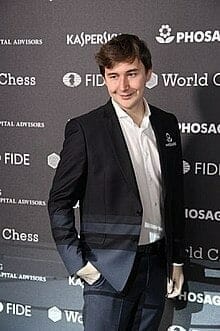 Sergey Alexandrovich Karjakin (born 12 January 1990) is a Russian chess grandmaster (formerly representing Ukraine). A chess prodigy, he previously held the record for the world’s youngest ever grandmaster, having qualified for the title at the age of 12 years and 7 months.Karjakin won the European U10 Chess Championship in 1999, and he was the World U12 Chess Champion in 2001. He earned the International Master title at age 11, and was awarded his grandmaster title in 2003. He represented Ukraine at the Chess Olympiad in 2004, winning team and individual gold. He competed in two more Chess Olympiads for Ukraine, and won the Corus chess tournament in 2009, before transferring to Russia. He has since represented Russia five times in the Chess Olympiad, winning individual gold in 2010. He also won team gold with Russia at the World Team Chess Championship in 2013 and 2019.
Karjakin won the 2012 World Rapid Chess Championship, and the Norway Chess tournament in 2013 and 2014. He competed at the Candidates Tournament 2014, placing second. He won the Chess World Cup 2015, thus qualifying for the Candidates Tournament 2016. He won the tournament and earned the right to challenge for the World Chess Championship. In November 2016, he lost the championship match to Magnus Carlsen in the rapid tiebreaks after drawing 6–6 in the classical games. He won the 2016 World Blitz Chess Championship. He participated in the Candidates tournament again in 2018, placing third.