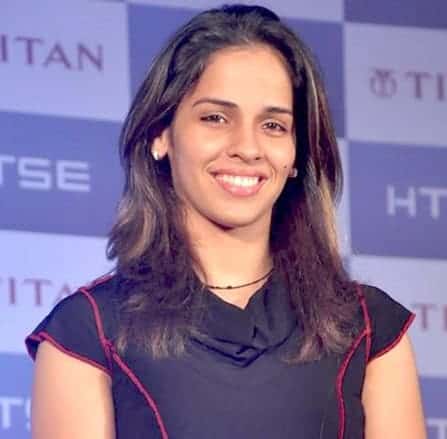 Saina Nehwal (born 17 March 1990) is an Indian professional badminton singles player. A former world no. 1, she has won over 24 international titles, which includes eleven Superseries titles. Although she reached the world’s 2nd in the 2009, it was only in 2015 that she was able to attain the world no. 1 ranking, thereby becoming the only female player from India and overall the second Indian player – after Prakash Padukone – to achieve this feat. She has represented India three times in the Olympics, winning a bronze medal in her second appearance.Nehwal has achieved several milestones in badminton for India. She is the only Indian to have won at least one medal in every BWF major individual event, namely the Olympics, the BWF World Championships, and the BWF World Junior Championships. She is the first Indian badminton player to have won an Olympic medal, the first Indian to have reached the final of the BWF World Championships, along with being the only Indian to have won the BWF World Junior Championships or. In 2006, Nehwal became the first Indian female and the youngest Asian to win a 4-star tournament. She also has the distinction of being the first Indian to win a Super Series title. In the 2014 Uber Cup, she captained the Indian team and remained undefeated, helping India to win bronze medal. It was India’s first medal in any BWF major team event. Nehwal became the first Indian to win two singles gold medals (2010 and 2018) in Commonwealth Games.
Considered one of the most successful Indian sportspersons, she is credited for increasing the popularity of badminton in India. In 2016, the Government of India (GoI) conferred the Padma Bhushan – India’s third highest civilian award – on her. Previously, the nation’s top two sporting honours, namely the Rajiv Gandhi Khel Ratna and the Arjuna Award, were also conferred on her by the Government of India. Nehwal is a philanthropist and was ranked 18th on the list of most charitable athletes.