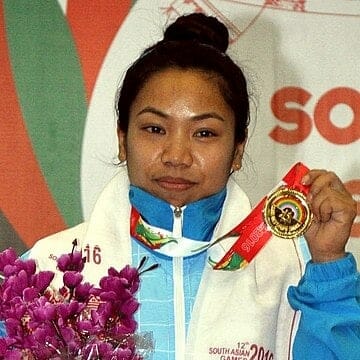 Saikhom Mirabai Chanu (born 8 August 1994) is an Indian weightlifter. She won the silver medal at the 2020 Tokyo Olympics in Women’s 49 kg category. Mirabai Chanu has won the World Championships and multiple medals at the Commonwealth Games. She was awarded the Padma Shri by the Government of India for her contributions to the sport. She was awarded Major Dhyan Chand Khel Ratna award by the Government of India in 2018.Chanu won the silver medal in the women’s 48 kg weight class at the 2014 Commonwealth Games, Glasgow; she went on to break the games record en route to the gold medal at the 2018 edition of the event held in Gold Coast. Prior to the 2020 Summer Olympics, her biggest achievement came in 2017, when she won the gold medal at World Weightlifting Championships held in Anaheim, California.