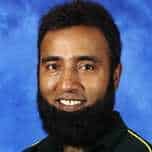 Saeed Anwar (Urdu: سعید انور; born 6 September 1968) is a Pakistani former cricketer and a former captain for Tests and ODIs. An opening batsman and occasional slow left arm orthodox bowler, Anwar played international cricket between 1989 and 2003. Considered one of greatest opening batsmen Pakistan has ever produced, Anwar has scored twenty centuries in ODIs, more than any other Pakistani batsmen in this format. He played 55 Test matches, scoring 4052 runs with eleven centuries, average 45.52. In 247 One Day Internationals (ODIs) he made 8824 runs at an average of 39.21.
Anwar got a pair at his Test debut against the West Indies in 1990, and scored 169 runs in his third Test against New Zealand in February 1994. In 1998–99, he became the third Pakistani to carry his bat through a Test innings, and scored his highest Test score of 188 not out. He made four ODI centuries at Sharjah Cricket Association Stadium, including three consecutive during 1993–94. Anwar scored two successive hundreds on three occasions in his career. He is most notable for scoring 194 runs against India in Chennai in 1997, the highest score for that time, and now the tenth highest individual score in an ODI. Anwar participated in three Cricket World Cups, and captained Pakistan in seven Tests and 11 ODIs. In August 2003, he announced his retirement from International cricket.
Saeed Anwar was the highest runs scoring batsman for Pakistan in 2003 World Cup.