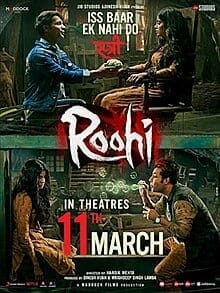 Roohi is a 2021 Indian Hindi-language comedy horror film directed by Hardik Mehta and produced by Dinesh Vijan under the banner Maddock Films. The film is the second installment in Dinesh Vijan’s horror-comedy universe, the first being Stree, and is to be followed by Bhediya. It tells the story of a ghost who abducts brides on their honeymoons. The film stars Rajkummar Rao, Janhvi Kapoor and Varun Sharma. It was announced on 29 March 2019 and filming kicked off on 14 June 2019 in Agra. The film was set to release in June 2020, but the COVID-19 pandemic in India interrupted production. The film was theatrically released in India on 11 March 2021. The film received generally negative reviews from the critics for its convoluted plot. Publications like The Indian Express named it as one of the worst Hindi films of 2021 so far.