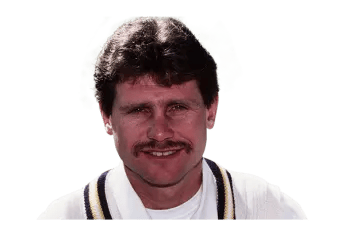 Robin Arnold Smith (born 13 September 1963) is an English former cricketer.
Smith was nicknamed Judge or Judgie for his resemblance to a judge when he grew his hair long. Like his older brother Chris, he was unable to play for the country of his birth because of the exclusion of the apartheid regime from international cricket, but because he had British parents he qualified to play for England.He played for England in eleven home test series and on six overseas tours from 1988 to 1996. Smith was best known for his abilities against fast bowling, with what was regarded as a trademark square-cut that was hit ferociously. He trained to be a psychologist.