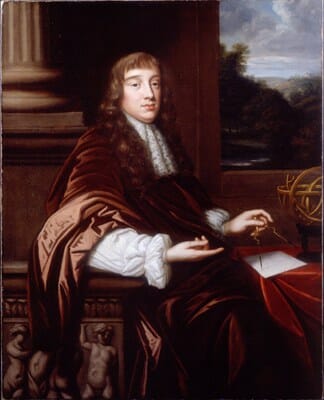 Robert Hooke FRS (28 July [O.S. 18 July] 1635 – 3 March 1703) was an English scientist and architect, a polymath, recently called “England’s Leonardo”, who, using a microscope, was the first to visualize a microorganism. An impoverished scientific inquirer in young adulthood, he found wealth and esteem by performing over half of the architectural surveys after London’s great fire of 1666. Hooke was also a member of the Royal Society and since 1662 was its curator of experiments. Hooke was also Professor of Geometry at Gresham College.
As an assistant to physical scientist Robert Boyle, Hooke built the vacuum pumps used in Boyle’s experiments on gas law, and himself conducted experiments. In 1673, Hooke built the earliest Gregorian telescope, and then he observed the rotations of the planets Mars and Jupiter. Hooke’s 1665 book Micrographia spurred microscopic investigations. Thus observing microscopic fossils, Hooke endorsed biological evolution. Investigating in optics, specifically light refraction, he inferred a wave theory of light. And his is the first recorded hypothesis of heat expanding matter, air’s composition by small particles at larger distances, and heat as energy.