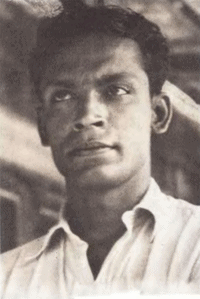 Ritwik Kumar Ghatak (4 November 1925 – 6 February 1976) was a noted Indian film director, screenwriter, and playwright. Along with prominent contemporary Bengali filmmakers Satyajit Ray, Tapan Sinha and Mrinal Sen, his cinema is primarily remembered for its meticulous depiction of social reality, partition and feminism. He won the National Film Award’s Rajat Kamal Award for Best Story in 1974 for his Jukti Takko Aar Gappo and Best Director’s Award from Bangladesh Cine Journalist’s Association for Titash Ekti Nadir Naam. The Government of India honoured him with the Padma Shri for Arts in 1970.