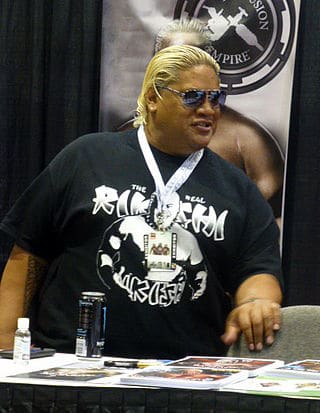 Solofa F. Fatu Jr. (born October 11, 1965) is an American professional wrestler, best known under the ring names Rikishi and Fatu with World Wrestling Entertainment (WWE), where he is a one-time Intercontinental Champion, two-time World Tag Team Champion, and one-time WWE Tag Team Champion. He is a member of the Anoa’i family of Samoan wrestlers. He was inducted into the WWE Hall of Fame by his sons, wrestlers Jey and Jimmy Uso, in 2015.