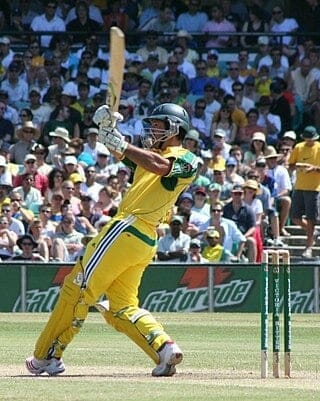 Ricky Thomas Ponting (born 19 December 1974) is an Australian cricket coach, commentator, and former cricketer. Ponting was captain of the Australian national team during its “golden era”, between 2004 and 2011 in Test cricket and 2002 and 2011 in One Day Internationals (ODIs) and is the most successful captain in international cricket history, with 220 victories in 324 matches with a winning rate of 67.91%. He is widely considered to be one of the best batsmen of the modern era and in December 2006 reached the highest rating achieved by a Test batsman for 50 years, although this was surpassed by Steve Smith in December 2017. He stands second in the list of cricketers by number of international centuries scored behind Sachin Tendulkar.
Domestically Ponting played for his home state of Tasmania as well as Tasmania’s Hobart Hurricanes in Australia’s domestic Twenty20 competition, the Big Bash League. He played as a specialist right-handed batsman, an excellent slip fielder, as well as a very occasional bowler. He led Australia to their second 5–0 Ashes win as well as victory at the 2003 and 2007 Cricket World Cups and was also a member of the 1999 World Cup winning team under Steve Waugh. He led Australia to consecutive ICC Champions Trophy victory in 2006 and 2009. Combative and at times a controversial captain, statistically he is one of the most successful Test captains of all time, with 48 victories in 77 Tests between 2004 and 31 December 2010. As a player, Ponting is the only cricketer in history to be involved in 100 Test victories and was involved in the most ODI victories as a player, with 262 wins, having played in over 160 Tests and 370 ODIs.
A prolific batter, Ponting is Australia’s leading run-scorer in Test and ODI cricket. He was named “Cricketer of the Decade 2000” was named in the country’s best Ashes XI in a Cricket Australia poll in 2017 and in July 2018 he was inducted into the ICC Hall of Fame. He is the current assistant coach of the Australian national men’s cricket team, having been appointed to the role in February 2019.
Ponting announced his retirement from Test cricket in November 2012, the day before playing in his final Test against South Africa; this was his 168th and last Test appearance, equalling the Australian record held by Steve Waugh. He retired with a Test batting average of 51.85, although he continued to play cricket around the world until 2013.