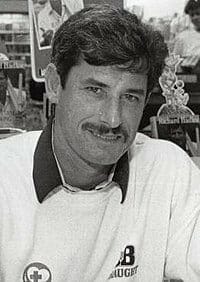 Sir Richard John Hadlee (born 3 July 1951) is a New Zealand former cricketer. Hadlee is widely regarded as one of the greatest all-rounders in cricket history, and amongst the very finest fast bowlers.Hadlee was appointed an MBE in the 1980 Queen’s Birthday Honours List and knighted in the 1990 Queen’s Birthday Honours List for services to cricket. He is a former chairman of the New Zealand board of selectors. In December 2002, he was chosen by Wisden as the second greatest Test bowler of all time. In March 2009, Hadlee was commemorated as one of the Twelve Local Heroes, and a bronze bust of him was unveiled outside the Christchurch Arts Centre.
On 3 April 2009, Hadlee was inducted into the ICC Cricket Hall of Fame. He is the most prominent member of the Hadlee cricket playing family.