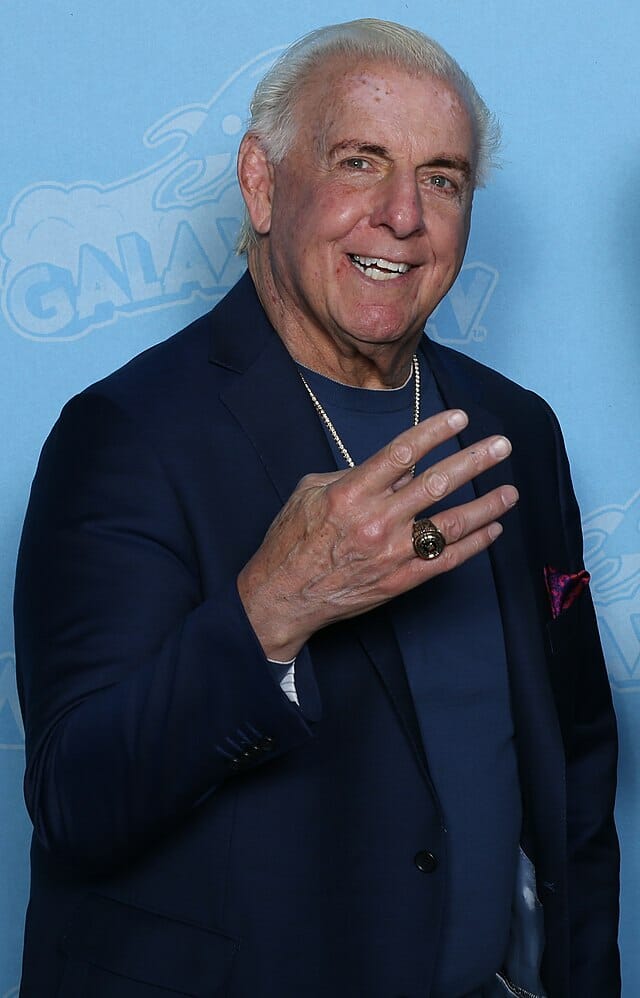 Richard Morgan Fliehr (born February 25, 1949), better known as Ric Flair, is an American professional wrestling manager and retired professional wrestler signed to WWE on a legend’s contract.
Ranked by multiple peers and journalists as the greatest professional wrestler of all time, Flair had a career that spanned almost 40 years. He is noted for his tenures with Jim Crockett Promotions (JCP), World Championship Wrestling (WCW), the World Wrestling Federation (WWF, later WWE) and Total Nonstop Action Wrestling (TNA). Since the mid-1970s, he has used the moniker “The Nature Boy”. A major pay-per-view attraction throughout his career, Flair headlined the premier annual NWA/WCW event, Starrcade, on ten occasions, while also co-headlining its WWF counterpart, WrestleMania, in 1992, after winning that year’s Royal Rumble. PWI awarded him their Wrestler of the Year award a record six times, while Wrestling Observer Newsletter named him the Wrestler of the Year (an award named after him and Lou Thesz) a record eight times. The first two-time WWE Hall of Fame inductee, first inducted with the class of 2008 for his individual career and again with the class of 2012 as a member of The Four Horsemen, he is also a member of the NWA Hall of Fame, and the Professional Wrestling Hall of Fame.
Flair is officially recognized by WWE as a 16-time world champion (8-time NWA World Heavyweight Champion, 6-time WCW World Heavyweight Champion, and two-time WWF Champion), although the number of his world championship reigns varies by source, ranging from 16 to 25. He has claimed to be a 21-time champion. He was the first holder of the WCW World Heavyweight Championship and the WCW International World Heavyweight Championship (which he also held last). As the inaugural WCW World Heavyweight Champion, he became the first person to complete WCW’s Triple Crown, having already held the United States Heavyweight and World Tag Team Championships. He then completed WWE’s version of the Triple Crown when he won the Intercontinental Championship, after already holding the WWF Championship and the World Tag Team Championship.